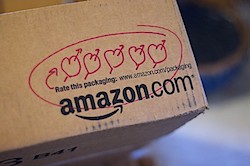 Amazon reported that this year’s holiday shopping season has been the biggest in its history.

The COVID-19 pandemic has completely upended the daily lives of almost every world citizen, and how we shop has been no exception. The closures of brick-and-mortar retail stores combined with access to online e-commerce and delivery has altered American shopping habits drastically. According to Forbes magazine, online shopping rose 77% compared to last year. Big retailers like Amazon, Walmart and eBay saw huge jumps in online sales at the beginning of the pandemic, and those numbers aren’t slowing down.

The problem with these giant online marketplaces, and with Amazon in particular, is that third-party sellers can use these platforms to hawk their wares with little oversight or regulation. And it’s those third-party sellers that are putting children at risk with dangerous, poorly made counterfeit toys that do not follow the rigorous safety standards governing most toys sold in brick-and-mortar stores.

Third-party sellers utilizing giant retailers to promote their wares can ship products from anywhere in the world directly to the purchaser, bypassing the many laws put in place to protect children from harmful toys. For example, one young child had emergency surgery and parts of his colon and intestines removed after accidentally swallowing magnets from a toy that broke open. The toy turned out to be a counterfeit, created and sold from a Chinese company using Amazon’s third-party seller system.
An investigation by The Wall Street Journal found over 4,000 products on Amazon.com that have been declared unsafe by federal agencies, are deceptively labeled or are banned by federal regulators. When shopping online using Amazon, Walmart or other large retailers that allow third-party sellers, confirm who is actually sending the product by looking for the following information:

There are a lot of ways to “screen” the toys you buy online before handing them off to little ones. Follow these suggestions to help keep their holiday season as joyful as possible: