Work injuries are life-changing and still all too common in America. Injured workers wonder if they will ever return to work, how they will pay for extended care and rehabilitation, and who will pay the bills while they recover. And sometimes, those injuries are fatal. Under federal law, every employee has the right to a safe workplace. But there are companies out there that disregard regulations meant to protect their employees and, in some cases, punish those who ask for more robust safety measures.

The National Council for Occupational Safety and Health recently released its “Dirty Dozen:” 12 companies that put workers and communities at risk due to unsafe practices. Here are some examples:

Amazon
Investigations have uncovered frequent safety violations at retail giant Amazon. New work-related injury data from the Occupational Safety and Health Administration (OSHA) reported that the rate of serious injury at Amazon is double that of non-Amazon warehouses. Two workers died within hours of each other at an Amazon warehouse in Bessemer, AL. One of the employees allegedly suffered a stroke after being denied his request to go home because he was not feeling well. And earlier this year, the Washington Department of Labor and Industries became the first-ever state agency to cite the retail giant for willfully violating workplace safety laws.

Foundation Food Group
A liquid nitrogen leak at a Foundation Food Group poultry plant northeast of Atlanta killed six workers and sent 11 more to the hospital when a freezer at the plant malfunctioned. Multiple maintenance workers entered the freezer room without safety precautions because they were never trained on the deadly effects of liquid nitrogen exposure. OSHA investigated the incident and found that the company “failed to implement any of the safety procedures necessary to prevent the nitrogen leak or equip workers responding to it with the knowledge and equipment that could have saved their lives” and concluded that the deaths were entirely avoidable.

Dollar General
Since 2016, OSHA has proposed over $3.3 million in penalties for safety violations to the nation’s largest discount realtor. These violations are most often for blocked electrical panels, obstructed exits, and forklift, housekeeping, and sanitation issues. Employees are also increasingly at risk for violent crime due to a lack of security guards and proper staffing. According to the Gun Violence Archive, more than 200 violent incidents involving guns at Family Dollar or Dollar General stores have occurred since 2017, with nearly 50 deaths. One Dollar General manager was fired after revealing the unsafe conditions at her store.

Starbucks
As a wave of unionization efforts ripple across the nation at multiple Starbucks locations, many employees feel that the corporation is retaliating by firing organizers. Shift supervisor Nikki Taylor and six other employees were fired just weeks after starting an effort to unionize their store. The unionization effort cited lax policies that resulted in a COVID-19 spread throughout the location. A Starbucks spokesperson said the firings resulted from violating safety and security policies. However, many fired workers argue that “Starbucks chose to selectively enforce policies that have not previously been consistently enforced, as a subterfuge to fire union leaders.” Last July, the National Labor Relations Board found that Starbucks unlawfully retaliated against two Philadelphia baristas due to their unionization efforts. 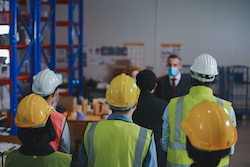 Safety planning and compliance are most effective when employers and employees communicate.

How to Fight for Safer Workplaces

If you believe your workplace is dangerous, you can request an inspection from OSHA. It is illegal for an employer to fire, demote, transfer, or retaliate against a worker who complains to OSHA and uses their legal rights. If you believe you have experienced retaliation, you can also file a whistleblower complaint. Click here for more information, including educational resources for employees and employers.

And if you are an employer, here are seven ways you can help ensure a safe environment for your employees. Bottom line: keep the lines of communication open with your employees. Involve them in safety planning and listen to their concerns.